The ethereal barren beauty of dry mountains surrounded by sparkling glaciers, cold deserts, emerald grasslands and mountain streams, casts a magical spell on the travelers visiting this supernatural landscape. The stark, rugged beauty of Ladakh is an extreme contrast to its heart-melting culture, friendly people & ethnic lingo- all with a Tibetan influence.

A living heritage of Buddhism, the colorful prayer flags of beautiful Gompas (monasteries) paint the stark landscape of Leh-Ladakh. It just feels like mini Tibet!

Built in 1672 AD, Hemis is the headquarters for all monasteries in Ladakh. Its stunning architecture and royal patronage makes it the most visited monastery in Ladakh.

Located a few kilometers from Leh, a short trek up the hill takes you to the monastery. Founded in the 11th century, the monastery is now home to over 100 monks and is the venue of annual Spituk Festival.

The oldest and once the largest monastery in Ladakh, Lamayuru is perched on the Leh-Srinagar Highway. Home to around 150 monks, only the prayer hall of the monastery is now open to the visitors. Meet the priest and explore the many myths and legends of Lamayuru.

Alchi Gompa, Shey Gompa, Thiksey Gompa, Stok Gompa and Phyang Gompa are some of the other revered monasteries of Leh-Ladakh.

The many freshwater and saline lakes of Leh-Ladakh mark the ethereal beauty of the region.

The ever-changing colors of Pangong Tso set against the deep blue sky are one of the best sights in Ladakh. This salt water lake, biggest in Asia, freezes in winters and is the venue for the Ice Skating Festival.

Translating to ‘Mountain Lake’, Tso Moriri is a glacial lake in the high mountains of the Changthang Plateau. Accessible only during the summers, the lake is one of the magical sights of Ladakh.

Located on the Rupshu Plateau in Southern Ladakh, the sheer size and depth of Tso Kar is breathtaking. A heavily saline lake; its blue waters surrounded by salt crusted on its edges; make an awesome picture.

The beautiful landscape of Ladakh beckons the adventure seekers! Let’s look at the most fascinating activities in Ladakh

Biking across the rough terrains on the highest motorable road in the world, at 18380 feet, through Khardungla is one of the most cherished experiences for the adventure junkies.

In winters, the waters of Zanskar River freeze making a blanket or chadar of ice upon which the famous Chadar Trek is undertaken. An enthralling experience, the trek is very popular amongst adventure enthusiasts.

Battling the rushing waters of Zanskar River on a raft is an adrenalin pumping adventure and is quite a rage with the thrill seekers visiting Ladakh.

Other Attractions in Leh- Ladakh:

Located in a remote corner of Ladakh, the timeless Buddhist monasteries, alpine lakes and glacial views of Zanskar Valley are mesmerizing.

Just 5 kilometers from Leh, this Japanese monument of peace is a marvel of architecture and a perfect place for watching sunrise and sunset.

This hill defies gravity. A vehicle with brakes unlocked when left at the base of the hill, moves uphill on its own. Science or supernatural? Do check out.

Tibetan handicrafts & artifacts, Pashmina shawls & stoles, carpets & rugs and apricot jam & oil are some of the collectibles from Leh Ladakh.

Like everything else in here, the Ladakhi cuisine is also influenced by Tibet. Thupka - a flavorful noodle soup, Tigmo- spicy broth with steamed bread, Mokthuk- a blend of momos & soup, Chhupri or Yak cheese and Chang-the local brew; are sure to tickle your taste buds.

Leh-Ladakh is best visited in the months from May to September.

How to reach Leh- Ladakh

By Air- The domestic airport in Leh is connected with Indira Gandhi International Airport in Delhi.
By Rail- The nearest Railway Station is Jammu Tawi, around 700 kilometers from Ladakh.
By Road- Leh Srinagar Highway and Leh- Manali highway both take you to Ladakh. However, the roads run through treacherous mountain passes that are closed during winters. 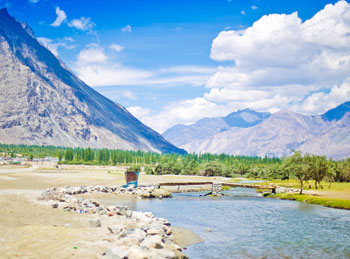 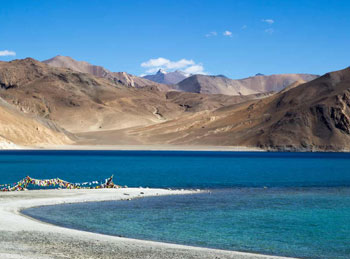 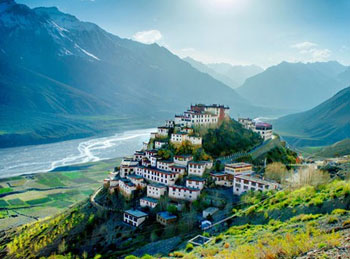 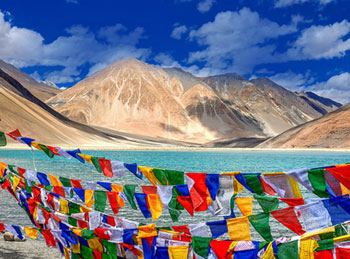